When Rodney and Marissa called to book their trip, we discussed which species they wanted to target.  Both West Virginia natives, the majority of their fishing encompassed small and large mouth bass on local lakes, ponds and rivers. Their first saltwater fishing adventure together, this trip would be a trophy conquest to catch biggest fish they could catch. Neither being strangers to the outdoors, we knew we were in for a couple days of great company, which would ultimately be topped off with some great fishing.

It was a quintessential steamy mid-August mornin’ when we put in the water at Pineland Marina and met Rodney & Marissa at the dock. We pulled out of the marina and 15 min. later, we stopped to cast net some mullet that would be the chosen bait for the day. 30 minutes of a hard run up into Charlotte Harbor, we arrived where the tarpon were the day before and began to idle looking for the first sign – some sort of a hint that the fish had not moved. We explained to them what to look for: a lackadaisical roll, or perhaps a free jump. With all eyes looking in conjunction with the Lowrance HDS-10 side imaging hard at work, we nailed our point of attack. First Mate D threw the anchor and readied the baits while Capt. Bo went over the Do’s and Don’ts of Tarpon Fishin’. Baits soakin’, we discussed our common appreciation for hunting, fishing, and health n fitness while learning about Marissa’s Pageant world and Rodney’s Demolition business.

After 1 hour and not even a catfish toying with our baits, Capt Bo said, “Alright, did someone eat a banana today?” Marissa dug in the hatch and revealed the feared fruit of seafarers. She assertively tossed the banana overboard in response to Capt Bo’s reprimanding and not 2 minutes later, the Sewell Custom Rod doubled over and the mighty Silver King soared. FISH ONNNN!!!  Although Rodney really wanted the tarpon, it was ladies first, and he gave the rod to his beauty queen.  And Marissa was ready! When you carry the title of Mrs. Physical Fitness United States, you are no stranger to the gym and hard work, and it showed as she broke the will of the 150 lb. tarpon in less than 20 min. Congratulations given and spirits high, we quickly put out fresh baits and waited in anticipation for Rodney’s turn. Not 30 min. went by when the sound of peeling drag lit up his face, reflected in the shine from the Silver King skyrocketing into the air. For a small mouth bass catchin’ West Virginia guy, he made zero mistakes, properly bowing to this mighty fish’s airborne combat tactics. It wasn’t long before he was all smiles along the gunwale, proudly posing for pictures with his giant silver prize.

2 for 2 right off the bat, the couple successfully checked Tarpon off their bucket list and we decided to celebrate at none other than the Lazy Flamingo on Bokeelia. With mesquite grilled triggerfish filled bellies, we embarked for Part 2 of Day 1.  In route to our next fishin’ spot, we treated Rodney and Marissa to a little sightseeing tour in Pine Island Sound ~ birds, waterfront estates, and dolphins. We found a playful pod to show off their acrobatic talent behind our boat in the wake. Never gets old.

Their muscles well rested from the mid-day break, it was time to go after species #2 on the list ~ Goliath Grouper. Heading northwest with a well full of live mullet we pulled into Boca Grande pass. Again, Capt. Bo went through the Do’s and Don’ts specific to the technique for catching these monster grouper. With a beat down drag, somethin’ has to give. There are only 3 options: 1) Fish comes up, 2) Somethin’ breaks, or 3) You go in. The couple anxiously watched as a 3 lb live mullet with a 19/0 through it’s face sunk to the depths. Their bait started to get antsy, and DOONK, the Volkswagen with gills sucked in the bait! Suddenly it was an intense game of human and fish dominos.. Rodney holding on to Marissa, Marissa holding on to the rod doubled over, the rod holding onto a beast under the sea! Capt. Bo threw the Lake and Bay into reverse to drag the fish out of the structure. The Fitness queen hammered down and won the battle, bringing the 100 lb Goliath to the surface. We all hooped and hollered at what she had just accomplished. Some quick photos to capture the moment and the colorful grouper swam back down to the depths. Rodney up next, unfortunately didn’t have lady luck on his side. So as the fireball sank into the horizon emitting a glorious dusk, we through in the towel content on the day’s achievements, knowing tomorrow would be a new day.

Tarpon and Goliath Grouper off the list, the last species to conquer would be a little more toothy. Heading south out of Pineland Marina, we hit the trusty mullet hole in Pine Island Sound. Not far from there, we trolling motored down a sandbar looking for stingrays to use as chum and bait. Our final destination would be just north of Sanibel. Fishing a small area of low bottom where the depth went from 4 to 5 ½ ft, creating a slough. First Mate D chummed a whole mullet and cut baits. Just as Capt. Bo strategically cast out the baits, a gust of wind hit our backs. We turned to see an ominous storm heading our way with the promise we would get a wet butt. But this time of year, storms are quite finicky so we held our ground much to our contentment as the winds and rain dissipated. Almost in synch with the storms’ departure came the arrival of our toothy predator chomping at our bait! Capt. Bo rushed to the rod doubled over in the holder and quickly gave it to Marissa as Rodney strapped the fighting belt on her. Several solid headshakes signified a decent sized shark. Once again, putting her muscles to the test, she battled her 6 ft quarry boat-side in less than 30 minutes. She excitedly questioned, “Now what!?”, to which Capt. Bo responded, “a photo of a lifetime!” First Mate D readied the cameras as Capt Bo prepped the 100 lb bull shark for his photoshoot. Not many other species have been on the earth as long as the ‘shark’. Being the top of the food chain, this magnificent creature has earned the respect of anglers worldwide. Marissa proudly posed with her shark for photos, gracious for having the opportunity to catch such a species. Rodney beamed with joy at the feat his wife had just accomplished.

After successfully conquering Tarpon, Goliath Grouper, Shark, and even a couple ‘line sighters’ for good measure in our pristine estuaries of Southwest Florida, the West Virginia Pageant Queen and Demolition King duo is hooked on the saltwater game. For their next adventure, we will be fishin’ them for barracuda and sharks on the world famous flats of Key West.  Meanwhile, Capt. Bo and First Mate D will be taking a trip up north to see if we can handle their backwoods playground of white water rafting, zip line canopy tours and small mouth bass. That’s one of the cool aspects of guiding for a living ~ cultivating relationships that encourage a common passion and appreciation for all our great outdoors has to offer. 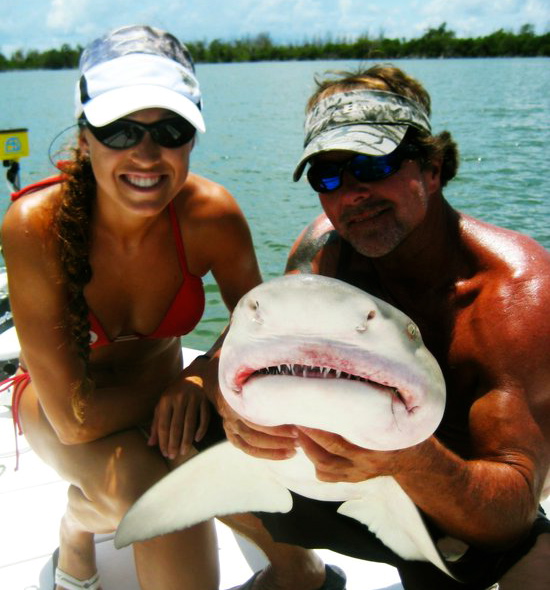