Capt. Bo Johnson and First Mate Deidra of Tenacity Guide Service are asking all our friends, family, followers, clients and supporters to take note of the following.

This is a classic example of irresponsible journalism and inexcusable malicious bashing of an established and reputable business like Tenacity Guide Service. Naturally, emotionally ignorant statements by the inaccurately informed, followed onto the social media platform. It is amazing the quantity of people on Facebook who love to get behind the keyboard and make statements that are not exactly accurate, and the rest just fall in line. And ya wonder why it is easy for PETA and other groups alike to try and take our hunting and fishing from all of us. Whether you wanna catch a trout in a stream or catch big game, REMEMBER, in their eyes, we are ALL the same. So pick your battles wisely. You may just need us on your side one day.

After reading the below, if y’all stand behind us, you know where to UNclick the Field & Stream Magazine ‘LIKE’ button on their Facebook page. (PS. They bashed Sarah Palin right after us, so at least we are in good company) 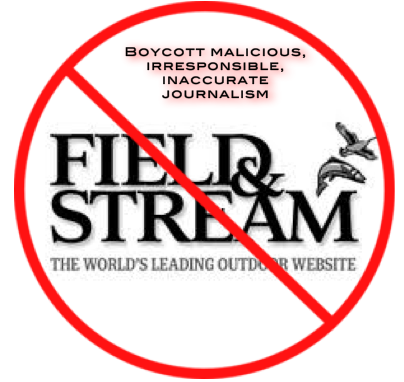 First off, the editor, Joe Cermele, obviously was lacking content so he copied Outdoor Life who published a story on us a couple weeks ago. If Joe would have done an ounce of responsible research on the Captain, he would know Bo is the FARTHEST you can get from a “Frat dude, slamming beer, showing off to impress girls in bikinis.” Irresponsible journalism does not excuse intentional bashing of a reputable business like Tenacity Guide Service.

Secondly, let me provide y’all with some background on this clip to clarify Capt. Bo’s intentions —->

What was not mentioned in this article is that Capt Bo formerly wrestled alligators and conducted venomous snake shows when he ran airboat tours in the Everglades for several years.

He has 20+ years guiding on the water as a charter captain and has accrued ample experience handling sharks, tarpon, goliath grouper, etc. He is known amongst his peers, friends and clients as “The Shark Whisperer”.

This isn’t some shenanigan to Capt Bo. It is a way of life and we give our sharks the utmost respect and know what they are capable of. I First Mate 4-5 days a week and am in constant admiration of his abilities and passion for providing our clients with an experience of a lifetime.

It was not in this instance, nor is it ever, about ‘impressing the ladies’ as you, Joe, incorrectly proposed. There was NOT alcohol involved- you “c’mon”- This is our JOB, and we take it seriously – for instance, doing everything in our power to get that hook out and not just cut the leader as ya suggested. Bo and I have filmed 3 MadFin Shark Series together for the Outdoor Channel and have won it twice. Ya think they let bozos on there? Not hardly.

What this video was about at the core was to get the job done– ‘Getting the job done’ for us means giving our clients photos of a lifetime. Bo has gotten in the water numerous times and controlled the shark for the client to get a one of a kind photo. Capturing an epic photo for our CLIENTS was exactly what he was doing when the shark piped up again and we happened to catch it on film. That shark was in NO WAY hurt, y’all know that now..

And for all y’all that have provided negative commentary that fish as well, do you think that when you catch your fish species of choice, and hold him up for a picture, it is ‘harassment’?? Just because we choose to hold bigger fish than a brook trout, is it any different when ours squirm out of our hands than when it squirms out of yours?? Fishing is all relative. Don’t hate.

Lastly, conservation is a huge part of our agenda. We work closely with MOTE marine to provide them with data that is crucial to research efforts. This research has a positive impact on the conservation and sustainable use of marine resources to benefit our local, national and international communities.

Thanks for the feature Outdoor Life! … I mean.. Field & Stream!
How’s the saying go? No publicity is bad publicity?

In a single day, we have received apologies from reputable fishing industry magazines, tv hosts, sponsors etc. for Field &Stream’s irresponsible journalism, stating they have nothing but the utmost admiration for what we do.

We are very appreciative and grateful for our supporters who have already vocalized their thoughts. Thank you all very much. We love y’all!!!!!
-Capt. Bo & First Mate D

Jason Patterson: “My family and I have been fishing with Bo and Deedee for as long as I can remember. It’s funny you don’t hear about the story of Bo and Dee meeting Tred Barta on the docks at Key West and strapping Him and His wheelchair in their boat and taking him out to catch a cuda. The first time he’d been offshore since his illness. You don’t hear about him taking my father who is dying of cancer out for a trip of a lifetime. 3 hours straight on a Redfish school catching and releasing one redfish after another. You don’t hear about him taking time out of his MadFin Shark tournament to rescue a group of kids that had rented a sailboat and had no business doing it and were on their way to Cuba when Bo drug them back to Key West. This was a poorly researched article. Shame on You. There are no finer people than Bo and Dee my subscription to F&S is cancelled.”

Jennifer Stesha Hurst: “It’s a shame that people are allowed to publish things with out proper reference or confirmation of facts now a days. Bo Johnson has spent more time on the water and with these animals then anyone else I know. He has a tremendous amount of respect for these sharks and all other animals. Having enough understanding of an animal that you no longer have a fear of them does not equate to vicious or malicious behavior.”

Chris Rush: “Field and Stream got this one all wrong anyone that know Bo Johnson and Deidra Outdoors knows these folk are the most caring sincere folks that exist on the water no one has more of a deeper love and understanding of the outdoor world than them! Hands on all the time Keep showing the world the beauty of all them big sharks y’all catch and keep growing the love of the outdoors to all that get the pleasure of fishing with you guys! You guys are the best! Just unliked there page and will make sure this gets attention!! Don’t sweat these totally mindless folks that wrote that crap!”

Cody Reaser: “I am unsubscribing from this magazine solely because of this incident and writers like Joe that are ignorant. Field and stream have lost all of my respect I had for them, just confirmed my cancelation and I have been a subscriber for many years, sad that F&S would hire someone like that. You call yourselves outdoorsman, I’ll take my money somewhere else, capt Bo is the classiest guide my family has ever had”

Jamie Lyn Riley: “Fieldandsteam.com should be ashamed of themselves for saying these untrue things about Bo.. One girl Deidra Outdoors is his other half.. This guy is NOT trying to impress two women.. Get your facts straight!! This is insulting to him and his business!!!! This is a man that respects wild life and has a lot of experience.. I feel people are jealous and just want him to loose success!”

Sergio Perez: “It’s astonishing how the keyboard jockeys flock together and feed off one another. Joker Joe just needs to shut up and fish. Publishing such an inaccurate and deceiving “article” is a perfect example of the drive by media that exists today…..Bo and Deidra, we’ve got your six and will continue to support y’all 110% from this side of the pond. Fish On!!”

Rebecca Driver Barela: “Nothing but respect and admiration for Captain Bo and First Mate Deidra. Field and Stream, you screwed up. Here’s your chance to rectify it. Will you, or will you let your incorrect article stand? Time to Man Up!!”

Capt. Ed McCormick: “I’m glad you posted this for the opportunity to comment because I did not want to sign up for the Field & Stream website simply to comment, especially after seeing how ridiculous the article was. First of all, these greeny type fisherman need to understand that just because they gently glide a trout back into the water after removing a barbless hook while wearing all their Orvis gear does not mean that the rest of the fishing community lacks respect for fish. If this dumbass would have watched Bo Johnson and Deidra Outdoors on TV going the extra mile to try and remove a hook from a shark and not just cut the leader as he suggested, maybe he wouldn’t have been so quick to run his mouth. I could go on and on here, but it is obvious from his article that the writer knows little of the true Florida lifestyle since it was immediately assumed that drinking was involved and it was all done to “impress” the ladies. YES PEOPLE I know it’s a shocker to many, but girls here wear bikinis to fish and bowfish in. It’s not a phenomenon ! Maybe if the writer had more of a life he wouldn’t be writing articles filled with assumptions to try and put down a highly respected Captain just because he himself didn’t have the guts to do what was seen in that video. The antis are waging a battle against hunters and fisherman alike and if people don’t start sticking together and respecting ALL styles of fishing and hunting, we will only see more of this infighting which is exactly what the PETA types want. I have lost all respect for Field and Stream for allowing this type of rhetoric on their website. I have personally hung over the side of a boat with Bo and watched his release of fish and you will not find a Captain that has more respect for the safe release of a fish anywhere. Bo and Deidra are the best at what they do and maybe these writers should do a little more homework about who they are putting down before launching an article on a public platform like the Field and Stream website. Keep up the good work guys! The important people in the outdoor world know the truth!”